Could This Be Neil Young’s Last Tour With Crazy Horse? 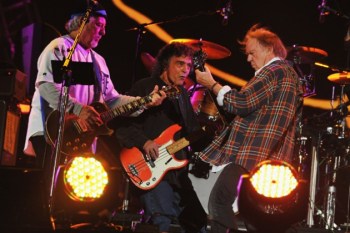 In an extensive interview with Rolling Stone, Crazy Horse guitarist Frank ‘Poncho’ Sampedro expresses some concerns that Crazy Horse’s current tour with Neil Young may be their last.

As the baby of the band at 64 years old, Sampedro acknowledges that the health of the Crazy Horse members, as well as Young himself, will ultimately dictate how much longer the band continues to perform.

“I just think once it stops it’s going to be kind of hard to get it rolling again,” he says on the phone from his home in Hawaii. “My gut tells me this is really the last tour. I hate saying their ages, but I’m 64 and I’m the baby of the band. I love playing and we’re playing as good as we ever did, but at any time something could go down with any one of us.”

There has been a flurry of activity in the Neil Young and Crazy Horse camp over the last year. After not having worked together for almost a decade, the longtime cohorts released two full-length records last year — ‘Americana‘ and ‘Psychedelic Pill‘ — and have been touring the world since last August. Sampedro says that many of the group’s shows are extending well beyond the two-and-a-half-hour mark.

“Our shows are physical,” he states. “It takes a lot of energy to play that much. It just seems at some point something is going to break. I already had an operation on my thumb. Neil’s wrist bugs him, and he has to tape it when he plays. You can’t fool time. You can’t count on this happening again in five years.”

Next up on Neil Young and Crazy Horse’s tour schedule is a ten-show run through Europe, beginning on June 2 in Germany and wrapping up on June 17 in England.

All I can say is that if this is (and I hope not) Neil’s last tour with Crazy Horse I am glad that I got to see them on Saturday November 24, 2012 along with The Sadies and also Patti Smith at Scotiabank Place in Ottawa, Canada. It was great just to see the band get up there and just jam away as if they were all 16 years old and playing in a garage somewhere. The thing that disappointed me was that the write-ups in the local paper and the comments following were not that great and only reason for that is that most of them went there expecting to hear a greatest hits package played note for note and not 15-30 minute long jam sessions. Why people go to concerts expecting something like that is beyond me, if that’s what you want then stay home and listen to the damn records. Also a real fan would know that on the “Psychedelic Pill” that 3 of the 9 songs were between 16-27 minutes long and live they will be just as long if not longer. So to Neil & Crazy Horse thanks for an amazing show & Keep On Rockin’ In The Free World!! Click here to watch a part of the Ottawa show and stop FUCKING UP