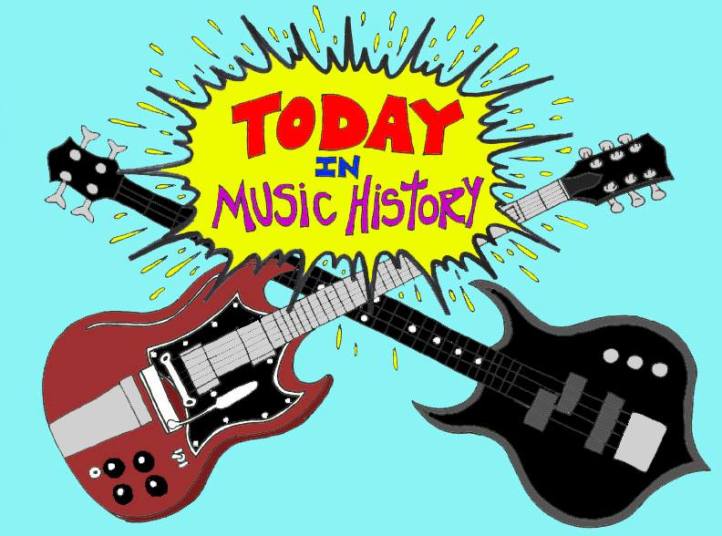 1963 : Manfred Mann hold their first concert (as the Mann-Hugg Blues Brothers) at the Marquee Theatre in London.

1964 : The Beatles spent the day filming at Twickenham Studios for A Hard Day’s Night. Filming on a stage set made to look like a train guard’s cage, where the Beatles played cards and mimed to ‘I Should Have Known Better’.

1966 : This week’s ITV music show ‘Ready Steady Go’, was entirely devoted to the music of ‘The Godfather Of Soul – James Brown.

1967 : Music publisher, Dick James, announced that 446 different versions of the Paul McCartney song ‘Yesterday’ had been recorded so far.

1968 : The Otis Redding single ‘(Sittin’ On) The Dock Of The Bay’ went gold in the US three months after the singer was killed in a plane crash.

1970 : Winners at this year’s Grammy awards included Joe South for song of the year with ‘Games People Play’, Crosby Stills and Nash won best new artist, and The Fifth Dimension won Record of the year with ‘Aquarius / Let The Sun Shine In.’

1970 : Blood, Sweat & Tears are nominated for a then-record eleven Grammy Awards (but only win three).

1970 : Deja Vu, the first album by Crosby, Stills, Nash & Young, (and the second by the trio configuration of Crosby, Stills, and Nash), was released. It topped the pop album chart for one week and spawned three US Top 40 singles: ‘Teach Your Children’, ‘Our House’, and ‘Woodstock’.

1971 : Jim Morrison of The Doors arrived in Paris booking into The Hotel George’s, the following week he moved into an apartment at 17 Rue Beautreillis in Paris. Morrison lived in Paris until his death on July 3rd 1971.

1972 : Wings’ “Give Ireland Back To The Irish” is listed as #23 in the Melody Maker chart. An article in the same issue reports it has been banned by the BBC as “unsuitable for broadcasting.”

1972 : Harry Nilsson was at No.1 on the UK singles chart with his version of The Peter Ham and Tom Evans song ‘Without You’. First recorded by Badfinger in 1970, the song was also a No.1 for Mariah Carey in 1994.

1977 : The Clash appeared at The Roxy Club, London, supported by The Slits, the first all-female punk group who were making their live debut.

1978 : French singer Claude Francois was electrocuted changing a light bulb while standing in his bathtub. He had the 1976 UK hit, ‘Tears On The Telephone’.

1978 : The debut single from Kate Bush, ‘Wuthering Heights’ a song inspired by the Emily Bronte novel, started a four-week run at No.1 on the UK singles chart. Record company, EMI had originally chosen another track, ‘James and the Cold Gun’ as the lead single, but Bush was determined that ‘Wuthering Heights’ would be the first release from the album.

1994 : The Supremes receive a star on the Hollywood Walk of Fame.

2001 : Westlife went to No.1 on the UK singles chart with their version of the 1983 Billy Joel song, ‘Uptown Girl.’ It was a fund-raising record for Comic Relief, and gave the Irish group their 8th UK No.1.

2005 : The front door of Ozzy Osbourne’s childhood home in Birmingham went up for sale because the current owner was fed up with fans defacing it. Ali Mubarrat, who now owned the house in Lodge Road, Aston, said over the years it had become a pilgrimage destination. He was now auctioning the door on eBay and giving the money to charity.

2008 : Kid Rock returns to the Waffle House in Duluth, Georgia (where he was involved in a brawl the previous year), to hang out with Waffle House workers and customers as part of a charity meet-and-greet.

2008 : Madonna was inducted into the US Rock and Roll Hall of Fame at a star-studded ceremony in New York City, she received her honour at the Waldorf Astoria Hotel from singer Justin Timberlake. The 49-year-old thanked her detractors in an acceptance speech, including those who “said I couldn’t sing, that I was a One Hit Wonder. Rock star John Mellencamp, Leonard Cohen, The Ventures and The Dave Clark Five were also among the inductees.

2009 : Heavy metal group Iron Maiden’s tour manager criticised people who were arrested for trying to gatecrash a concert in Bogota. Colombian police arrested more than 100 people after stones were thrown hours before the group were due to perform. In a statement posted on the band’s website, Rod Smallwood said: “We abhor the inane behaviour of a small minority of people outside.” Riot police fired tear gas canisters at those who tried to enter the concert without tickets.

2011 : The former singer with Iron Maiden was jailed for nine months for fraudulently claiming benefits. Paul Andrews, fronted the band between 1978 and 1981, under the stage name Paul Di’Anno. Andrews, 52, was jailed at the city’s crown court after earlier admitting falsely claiming more than £45,000. Fraud investigators had viewed online videos and read about gigs on the performer’s website.

2015 : A jury in the United States ruled that the writers of ‘Blurred Lines’, copied a Marvin Gaye track. Jurors in Los Angeles decided that the 2013 single by Pharrell Williams and Robin Thicke breached the copyright of Gaye’s 1977 hit ‘Got To Give It Up’. The family of the late soul singer were awarded $7.3m in damages. Thicke and Williams denied copying the hit, and their lawyer said the ruling set a “horrible precedent”.

2015 : Jimmy Greenspoon, keyboardist with Three Dog Knight died after a long battle with cancer at the age of 67. During the course of their career, Three Dog Knight had 21 top 40 hits, including three No.1 singles.