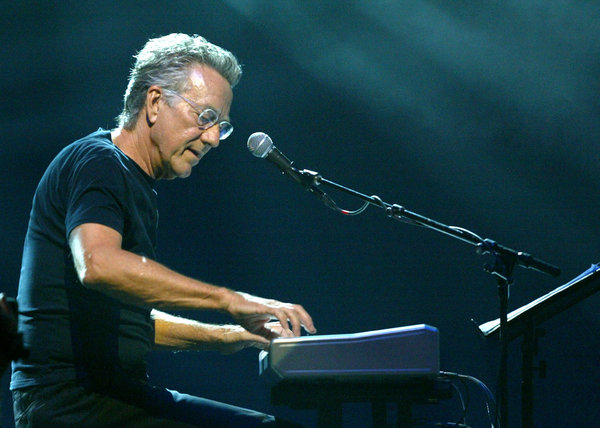 Another great loss for music as Ray Manzarek keyboardist and co-founding member (along with Jim Morrison) of The Doors has passed away at the age of 74 due to complications with his long battle with bile duct cancer. He is survived by his wife Dorothy, his son Pablo and two brothers, Rick and James. His family has asked that in lieu of flowers, fans should make an in memoriam donation in Ray’s name to Standup2cancer.org

“I was deeply saddened to hear about the passing of my friend and bandmate Ray Manzarek today,” said Doors guitarist Robby Krieger. “I’m just glad to have been able to have played Doors songs with him for the last decade. Ray was a huge part of my life and I will always miss him.”

Doors drummer John Densmore stated, “There was no keyboard player on the planet more appropriate to support Jim Morrison’s words. Ray, I felt totally in sync with you musically, it was like we were of one mind, holding down the foundation for Robby and Jim to float on top of. I will miss my musical brother.”

In 1962–1965, he studied in the Department of Cinematography at UCLA, where he met film student Jim Morrison. At UCLA, Ray also met Dorothy Fujikawa whom he would later marry and have his son Pablo. Forty days after finishing film school, thinking they had gone their separate ways, Manzarek and Morrison met by chance on Venice Beach in California. Morrison said he had written some songs, and Manzarek expressed an interest in hearing them, whereupon Morrison sang a rough version of “Moonlight Drive.” Manzarek liked the songs and co-founded the Doors with Morrison at that moment. During one interview in 2000 Manzarek recalled the band’s influences and its music :

“We were aware of Muddy Waters. We were aware of Howlin’ Wolf and John Coltrane and Miles Davis. Plus, Jan and Dean and The Beach Boys and the surf sound. Robby Krieger brings in some flamenco guitar. I bring a little bit of classical music along with the blues and jazz, and certainly John Densmore was heavy into jazz. And Jim brings in beatnik poetry and French symbolist poetry, and that’s the blend of The Doors as the sun is setting into the Pacific Ocean at the end, the terminus of Western civilization. That’s the end of it. Western civilization ends here in California at Venice Beach, so we stood there inventing a new world on psychedelics.”

The Doors went on to sell more than 100-million albums worldwide, receiving 19 Gold, 14 Platinum and five multi-Platinum albums in the U.S. alone. Manzarek played keyboard in The Doors, and created some of the most iconic rock music in history, including ”Light My Fire.”, “L.A. Woman,” “Break On Through to the Other Side,” “The End,” and “Hello, I Love You”.

After Morrison’s death in 1971, Manzarek went on to become a best-selling author, and a Grammy-nominated recording artist in his own right. In 2002, he revitalized his touring career with Doors’ guitarist and long-time collaborator, Robby Krieger when they formed a new version of The Doors which they called The Doors of the 21st Century which was fronted by former lead singer of The Cult, Ian Astbury. After legal battles over use of The Doors name with drummer John Densmore, they changed their name several times and ultimately toured under the name “Manzarek–Krieger” or “Ray Manzarek and Robby Krieger of The Doors”. The group was dedicated to performing the music of The Doors and Jim Morrison. John Densmore refused to participate because of Morrison’s absence, although Manzarek and Krieger always invited him.

The Doors were to become one of my favorite bands growing up even though Jim Morrison had died when I was only 9 years old and I obviously never got to see them live they were a big influence during my teenage years. I loved everything about them from Morrison’s poetic and influential lyrics, voice and wild stage persona, to Robby’s tasty guitar work and great writing, Densmore’s drumming on the back end, but the biggest influence on their overall sound would have to be Ray bringing it altogether on the keyboards. The Doors were also one of those rare bands that did not have a bass player, as that part was also handled by Ray on a Rhodes piano, that in itself tells a lot about the man’s talents and what he meant to the band. It is indeed another sad day for music and you will be missed Ray. Thank you for an awful lot of good memories, your impact on music as we know it will never be forgotten and all of the great music that you left us will live on forever. Say hello to Jim for all of us 🙂