1948 : Columbia Records started the first mass production of the 33-RPM long player. The new format could contain a maximum of 23 minutes of music per side versus the three minutes that could be squeezed on to a 78 RPM disc.

1955 : Jimmy Young was at No.1 on the UK singles chart with his version of ‘Unchained Melody’, (a theme for the obscure prison film Unchained and a hit for the Righteous Brothers in 1965). Young scored another ten Top 40 hit singles and went on to become one of UK’s favourite radio DJ’s

1964 : Touring Australia The Beatles played at Sydney Stadium in Sydney. This was Paul McCartney’s 22nd birthday and after the show his guests included 17 girls who were winners of the Daily Mirrors ‘Why I would like to be a guest at a Beatles birthday party’ competition.

1967 : The Jimi Hendrix Experience played their first show in the US at the Monterey International Pop Festival, 46 years ago tonight. Hendrix was pretty well established in the UK but very few in the audience that night knew what to expect. Hendrix had lost a coin toss with Pete Townshend deciding who was going to play first. The Who ended their set by smashing the equipment. They had set the bar.
Hendrix ended his Monterey performance with an unpredictable version of “Wild Thing“, which he capped by kneeling over his guitar, pouring lighter fluid over it, setting it aflame, and then smashing it in to the stage seven times before throwing its remains into the audience. This produced unforeseen sounds and these actions contributed to his rising popularity in the United States, and also resulted in one of the most iconic Rock and Roll pictures ever taken. 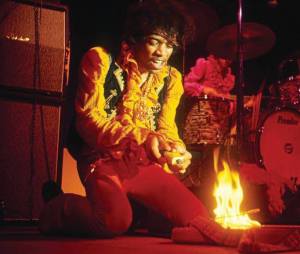 While Hendrix was on stage, Townshend had gone into the audience to watch the show. Pete was sitting next to “Mama” Cass Elliot of The Mamas & The Papas. Ma Cass leaned over to Pete and said “he’s stealing your act”. Townshend said “no, he’s not stealing my act – he’s doing my act.” Townshend said later on, “for me, it was an act and for him, it was something else, it was an extension of what he was doing.”

1974 : Peter Hoorelbeke drummer with US band Rare Earth was arrested after a concert for throwing his drumsticks into the crowd.

1975 : Elvis Presley had a face-lift at Mid South hospital, Memphis.

1976 : Abba gave a special live performance in Stockholm for Sweden’s King Carl XVI Gustaf and Silvia Sommerlath on the eve of their wedding.

1977 : Tom Petty and the Heartbreakers supported by The Boomtown Rats appeared at Friars, Aylesbury, England.

1977 : Fleetwood Mac went to No.1 on the US singles chart with ‘Dreams’, the group’s first and only US No.1, was also a No.24 in the UK. Stevie Nicks has stated she wrote the song at the Record Plant studio in Sausalito, California, in about 10 minutes.

1977 : Johnny Rotten and Paul Cook of The Sex Pistols were stabbed and beaten when they were attacked in a car park outside a London pub. They objected to the Pistols’ anti-monarchist song ‘God Save the Queen’. The next day, another member of the Pistols, Paul Cook, was beaten by a gang armed with iron pipes.

1978 : Grace Slick takes the stage with Jefferson Starship at the Lorelei Festival in Hamburg, Germany in a state of drunkenness. After she taunts the crowd with comments about Nazis and the war, the crowd riots, destroying much of their equipment. Slick would not return to the band until 1983.

1988 : ‘Doctorin’ The Tardis’ by The Timelords was at No.1 on the UK singles chart. The Timelords were Scottish duo Bill Drummond and Jimmy Cauty, who formed KLF. The song was a mash-up of the Doctor Who theme music, Gary Glitter’s ‘Rock and Roll (Part Two)’ with sections from ‘Blockbuster!’ by Sweet.

1992 : Peter Allen, best remembered for his 1972 hit, “I Still Call Australia Home,” which soon made its way into commercials for Qantas Airlines, dies at his home in Sydney, struck down with an AIDS-related throat cancer. He was 48 years old.

1993 : A&M Records chairman Jerry Moss and vice-chairman Herb Alpert announced they were leaving the company they founded more than 30 years earlier. They had sold A&M in 1990 to Polygram for $500 million. Moss and Alpert started the label in the garage of Alpert’s Los Angeles home in 1962. The label was the home to such acts as The Police, Bryan Adams, Joan Baez, Flying Burrito Brothers, The Carpenters, Joe Cocker, Supertramp and Herb Alpert & the Tijuana Brass.

1993 : Lollapalooza 1993 kicks off at Thunderbird Stadium, in Vancouver, BC. The main stage acts that year include the headliner, Primus, as well as Alice in Chains, Dinosaur Jr., Fishbone, Arrested Development, Front 242, Babes in Toyland (first half), Tool (second half), and Rage Against the Machine.

2000 : It was reported that sales of pirate music CDs had now exceeded more than 500 million a year and accounted for one in every five sold. The Phonographic Industry estimated it was costing the music industry $5.1 billion in lost sales.

2002 : The ex-husband of Spice Girl Mel B appeared in court on a charge of assaulting a three year-old boy. Dancer Jimmy Guizar denied assaulting the child in a play area at London Zoo.

2002 : U2 lost a bid to prevent the demolition of Hanover Quay studio in Dublin.’Over 8,000 fans signed an online petition to preserve the studio, where the group recorded ‘All That You Can’t Leave Behind’ and some of their ‘Pop’ album.

2002 : Billy Joel checks into an alcohol rehabilitation center in Connecticut for a ten-day stay.

2003 : Pop Idol creator Simon Fuller became the first British music manager since The Beatles’ Brian Epstein to hold the top three positions in the US singles chart. Fuller, who steered the Spice Girls and S Club 7 to success, was in charge of bestselling artists Clay Aiken and Ruben Studdard, together with the American Idol 2 Final 10. During 2003 Fuller sold more than ten million records around the world and has had 96 No.1 singles and 79 top-placed albums in both the US and UK during his career. He was named in the latest Sunday Times Rich List as the 359th wealthiest person in the UK with assets of $153 million.

2007 : American singer and record producer Hank Medress died of lung cancer at 68. He was the vocalist on The Tokens 1961 US No.1 hit ‘The Lion Sleeps Tonight’, Medress was also in the vocal quartet The Linc-Tones with Neil Sedaka and produced the hit single ‘He’s So Fine’ by The Chiffons, as well as Tony Orlando’s ‘Knock Three Times’.

2008 : A Lost Angeles hotel filed a lawsuit against Phil Spector for failing to pay more than $100,000 (£61,000), in outstanding bills for lawyers and expert witnesses in his murder trial. The Westin Bonaventure Hotel claimed that by the time Spector’s trial ended with a hung jury, the defendants owed the hotel more than $104,000.

2009 : A Minnesota woman, Jammie Thomas-Rasset, is found guilty of illegal sharing of music files via the Internet and is ordered to pay $1.92 million, $80 per work.

2010 : John Lennon’s handwritten lyrics to The Beatles song ‘A Day In The Life’ sold for $1.2m (£810,000) at an auction at Sotheby’s in New York. The double-sided sheet of paper with notes written in felt marker and blue ink also contained some corrections and other notes penned in red ink.

2011 : Leslie West of Mountain has his right leg amputated below the knee at a Biloxi, Mississippi hospital the day after performing at the Hard Rock Cafe in the city. West would say, “when I play ‘Mississippi Queen’ now, I think about Jesus Christ.”

2012 : At a Radiohead concert in a park in Toronto, metal rigging over a stage collapses one hour before show time. Various technicians were setting up the stage equipment when the incident occurred, injuring some and killing one drum technician, Scott Johnson, who was pinned under the rubble.