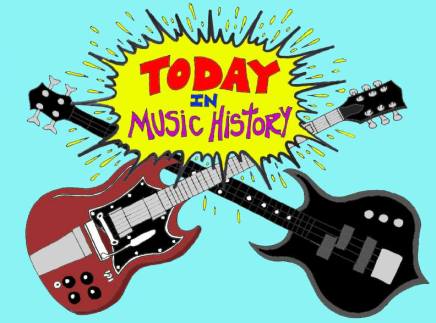 1958 : The first rock concert is held in Berlin, Germany, and it doesn’t go well, as agitated youth fight during a performance by Bill Haley and his Comets. By the time police cleared the Berlin Sportpalast, where the concert was held, five policemen and six audience members were seriously injured.

1964 : On the last day of recording their fourth album, Beatles For Sale, The Beatles are visited by rockabilly legend Carl Perkins, an early idol of theirs. The group decides then and there to cover Perkins’ Honey Don’t. At one point, Ringo calls the Sun records artists “Mr. Perkins,” to which he replies, “Son, I wish you’d just call me Carl. Mr. Perkins is my daddy.”

1965 : Queen Elizabeth II invested The Beatles with their MBEs at Buckingham Palace, London. According to an account by John Lennon, the group smoked marijuana in one of the palace bathrooms to calm their nerves. Many former recipients gave their MBE’s back in protest, to which John Lennon responded “Lots of people who complained about us receiving the MBE received theirs for heroism in the war, for killing people.” He continued: “We received ours for entertaining other people. I’d say we deserve ours more.” When asked how he enjoyed meeting Queen Elizabeth II, John said “She’s much nicer than she is in the photos.”

1966 : English singer Alma Cogan died of stomach cancer aged 34. She scored the 1955 UK No.1 single ‘Dreamboat’, plus 20 other UK Top 40 hits. In the 50’s Cogan was the most consistently successful female singer in the UK and the youngest female act to top the charts during the 50’s.

1970 : A wake was held at the Lion’s Share in San Anselmo, California to celebrate the life of Janis Joplin. The singer who died of an accidental drugs overdose had left $2,500 in her will to throw a wake party in the event of her demise. The party was attended by her sister Laura and Joplin’s close friends; Brownies laced with hashish were unknowingly passed around amongst the guests. Joplin was cremated in the Pierce Brothers Westwood Village Mortuary in Los Angeles; her ashes were scattered from a plane into the Pacific Ocean and along Stinson Beach.

1971 : Al Green’s Tired Of Being Alone is certified gold.

1979 : AC/DC appeared at The Mayfair, Newcastle upon Tyne, England, supported by Def Leppard. The bands were booked to appear the night before but after a fire at the venue in the afternoon, the show was cancelled.

1984 : 19-year-old John D. McCollum killed himself with a .22 caliber handgun after spending the day listening to Ozzy Osbourne records. One year later, McCollum’s parents took court action against Ozzy and CBS Records, alleging that the song “Suicide Solution” from the album Blizzard of Ozz contributed to their son’s death. The case was eventually thrown out of court.

1991 : Legendary Rock concert promoter Bill Graham was killed when the Bell 206B JetRanger III helicopter he was riding in struck the top of a Pacific Gas and Electric transmission tower near Sears Point, northwest of Vallejo and exploded. The crash, which left the helicopter’s wreckage dangling near the top of the towering structure, killed Graham, his girlfriend Melissa Gold and pilot Steve Kahn. Graham had founded the Fillmore theaters in San Francisco and New York and had played key roles in supporting such bands as the Who, The Jimi Hendrix Experience, Janis Joplin, The Band, Bob Dylan, The J. Geils Band, The Allman Brothers Band and The Rolling Stones.

1991 : Ozzy Osbourne broke his foot after an accident on stage at a gig in Chicago, causing him to cancel the remaining dates of a US tour.

1993 : Michael Jackson is awarded a patent for the system that allows him to lean in unnatural angles during performances of “Smooth Criminal.” To recreate the video on stage, Jackson and his dancers wore special shoes that they could insert into pegs set up on stage for the famous lean.

1996 : The Spice Girls had their second UK No.1 single when ‘Say You’ll Be There’ started a two-week run at the top of the charts. The song included a harmonica solo, played by Judd Lander who also played the harmonica solo on Culture Club’s 1984 hit ‘Karma Chameleon’.

1998 : Fats Domino is awarded the National Medal of Arts from US President Bill Clinton.

1998 : US Federal courts refuse to issue an injunction against makers of mp3 players, one which the RIAA has been pushing for in light of rampant piracy.

1998 : John Michael Montgomery raises over $14,000 for the Jessamine Humane Society at his Putt for Paws golf tournament and concert. “We have a moral obligation to take care of these homeless animals,” Montgomery says. “After all, we domesticated them.”

2000 : The tree from U2’s song One Tree Hill is taken down. Located in Auckland, New Zealand, the tree had been attacked by activists and had to be removed.

2000 : Ontario Attorney-General Jim Flaherty requests that Canada’s federal government, which handles immigration matters, prevent Eminem from entering the country for a concert at Toronto’s SkyDome. The request stems from a complaint filed to the Toronto police hate crimes squad by a community activist who claims that the Interscope rapper’s lyrics advocate violence toward women.

2004 : Apple launched the U2 Special Edition iPod as part of a partnership between Apple, U2 and Universal Music Group. The new U2 iPod held up to 5,000 songs and featured a red Click Wheel and custom engraving of U2 band member signatures. The iPod was being introduced as the band released their new album ‘How to Dismantle an Atomic Bomb.’

2006 : Duran Duran guitarist Andy Taylor quit the band during the US leg of their world tour. A statement on behalf of the group described the relationship with Andy Taylor as unworkable and one that could not be resolved.

2007 : Pete Doherty was given a suspended prison term for drugs and motoring offences after admitting driving while uninsured, having no MOT and while in possession of crack cocaine, heroin, ketamine and cannabis. The Babyshambles singer was sentenced to four-months in jail, suspended for two years at West London Magistrates’ Court. He was also given an 18-month supervision order and a 12-month drug rehabilitation order and ordered to pay a £475 fine for driving without insurance or an MOT.

2007 : A judge in Los Angeles ruled that Britney Spears was no longer facing hit-and-run charges after she compensated the other car’s driver. But the singer would still face a charge of driving without a valid licence. She allegedly crashed into a parked car in North Hollywood in full view of photographers, before leaving the scene on 6 August.

2007 : 1,730 guitarists played the immortal Bob Dylan classic, ‘Knocking On Heaven’s Door’ in a bid to break a record in the state of Meghalaya, North East India. The guitarists hoped their achievement would earn them a place in the Guinness Book of World Records. The current Guinness World Record was held by a guitar-ensemble from Kansas City in the US when 1,683 guitarists, played Deep Purple’s ‘Smoke On The Water’.

2008 : AC/DC went to No.1 on the UK album chart with ‘Black Ice’ the Australian bands fifteenth studio album which went on to become a No.1 hit in 29 different countries and the second-best selling album of 2008.

2010 : Forbes Magazine released its annual list of the Top Earning Dead Celebrities. Michael Jackson led the way at $275 million, Elvis Presley was second at $60 million and John Lennon was fifth at $17 million.

2010 : Results of Ozzy Osbourne’s genome sequencing are revealed. The study shows that Ozzy has a very high predisposition for alcohol and cocaine addiction, and that he was partly descended from Neanderthals.

2010 : Keith Richards releases his autobiography, which is called Life. His drug use is a big topic – here’s a quote: “I loved a good high. And if you stay up, you get the songs that everyone else misses because they’re asleep.”

2011 : A coroner’s inquest on the death of Amy Winehouse reached a verdict of misadventure. The report explained that Winehouse’s blood alcohol content was 416 mg per decilitre at the time of her death, more than five times the legal drink-drive limit. According to the coroner ‘The unintended consequences of such potentially fatal levels was her sudden death’.